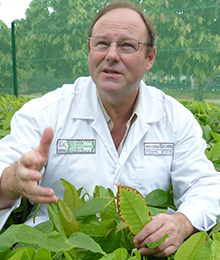 By Hans Joehr, Head of Agriculture for Nestlé

Much of the debate around the future of food production focuses on whether we will be able to grow enough to feed the world’s increasing population.

It’s something we will have to do with less land. More than half of that already used for agriculture is either moderately or severely affected by soil degradation, with climate change, extreme weather events, and a rise in pests and diseases all adding to the pressure.

But we shouldn’t forget another, equally important question: who is going to take on this extraordinary challenge?

According to recent surveys of rural demographics in the United States, Japan and the European Union, farming populations are ageing rapidly.

Less than 5% of farmers in the countries analysed were under 35. In the US, the average farmer is 58 years old, in Japan, 67. In Europe, more than one third of farmers are over 65.

It’s clear we haven’t done enough to convince young people that farming has the potential to not only provide them with an appealing level of income, but also social recognition.

Agricultural production systems and methods have certainly made farming less labour-intensive and more efficient than in previous decades, which is why food is available to most of us, every single day, at very low cost.

But this doesn’t mean that farming has become easier, or requires less skill. The competencies and knowhow required to run commercial agricultural operations are not only evolving rapidly; they are becoming more complex.

If you can find ways to intensify farming systems sustainably, without pollut¬ing, wasting or destroying natural resources, you can make a tremendous contribution to society and the environment.

We need intelligent and capable people for this. The very people who tend to leave the countryside for urban centres as soon as they have the opportunity.

The exodus of young, talented people from rural areas is nothing new. Neither is it confined to developed countries. Brazil and India report a shortage of farm labour, even though salaries for agricultural workers have risen significantly in recent years.

Some say that migration of this kind is inevitable, so there is no point in investing in initiatives to reverse the trend. This is wrong.

We should be doing more to provide education and incentives to encourage prosperous communities to develop in rural areas, as well as urban ones.

While farmers in developed countries generally have access to training, hundreds of millions of smallholders in most emerging countries do not. The majority become farmers not by choice, but by default, and often lack the most basic skills to run their farm effectively.

Putting increased resources into providing schooling and training for young farmers, and providing them with micro-finance and access to markets, would help to safeguard the future of agriculture and to alleviate poverty.

A good example of how this can work in practice is the self-sufficient agricultural schools initiative from the non-profit organisation Fundación Paraguaya.

The initiative, which was the most recent recipient of the Nestlé Prize in Creating Shared Value, sets up micro-businesses on school premises to provide students with technical and practical training, on top of the normal academic curriculum.

With support from Fundación Paraguaya, each school creates a ‘teaching and production’ business plan to define what kind of small enterprises it will set up. These range from milk production and farming to organic gardening, hotel services, bee keeping and egg production.

The goal is to teach teenagers the skills they need to run their own businesses, as well as making them more attractive to employers.

If the world is going to feed nine billion people by 2050, there needs to be a huge collective effort from business, development agencies, NGOs, aid organisations, and governments to systematically provide farmers with this kind of education and training.

It can be done, and it must be. It’s the only way we can make agriculture more efficient, more sustainable, and more attractive to young people.

Insight is where you can read diverse perspectives of people in our company. If you would like to join the discussion, please visit our corporate Facebook page