Nestlé Canada today released findings from a first of its kind study examining Canadians’ perceptions toward multinational organizations. The data clearly shows that, while Canadians do have an appreciation of how multinationals contribute to the country, organizations are facing tougher demands and expectations when it comes to operating in local communities –with the pressure expected to increase as Canada experiences significant demographic shifts and population growth in the coming years.

“Surprisingly, there has been very little research done on how multinationals are viewed in Canada,” said Shelley Martin, President and CEO, Nestlé Canada. “We wanted to find out exactly what matters most to Canadians when engaging with large corporations, including ours. We hope this study will provide multinationals with insights that will help them leverage their global strengths for the benefit of Canadian communities – to become more effective ‘glocal’ organizations."

For Nestlé, being a “glocal” company means having the size, scale and global expertise to offer Canadians the best products and services from around the world but delivering them with local people, in local factories, with local ingredients, and in a responsible, sustainable manner.

The research, conducted by Pollara, shows that Canadians view multinationals positively and believe they are contributing to the country’s social and economic fabric:

However, the study also found that multinationals face significant hurdles when it comes to being fully accepted by Canadians, with a majority feeling that multinationals need to do a better job of articulating how their values are aligned with consumer expectations.

“In Canada, and around the world, there’s a perception that it’s hard to like businesses once they grow beyond a certain size, despite how much they may contribute to the economy,” said Ms. Martin. “To overcome this, multinationals must focus on local relevance, be more transparent about where and how they profit, and clearly communicate how they are making a positive impact wherever they operate.”

Canada’s Diversity – Both a Challenge and an Opportunity

The study also found that Canada’s increasing diversity, while a strength, presents multinationals with a significant challenge. From distinct regional views to diverging preferences based on age, more work needs to be done today than in the past in order to satisfy the needs of a multitude of stakeholders.

From a regional perspective, the study found that:

When it comes to diversity among different age groups, Millennial respondents surprisingly view multinationals in a more favourable light than do their Boomer counterparts. Millennials are more likely than older Canadians to give global companies credit for:

Ms. Martin notes that the study’s data seem to indicate that multinationals in Canada are headed in the right direction but much still needs to be done to align perceptions with the reality that they are, in fact, contributing in a significant way to communities. To achieve this they must leverage all channels and technologies in order to effectively connect with an increasingly diverse group of stakeholders.

“We must be more proactive in our approach, communicating clearly on our purpose and values,” added Ms. Martin. “Multinationals have an opportunity to show our communities how our resources and perspectives as global entities compliments that of our local businesses, helping to enrich the lives of all stakeholders we touch.” 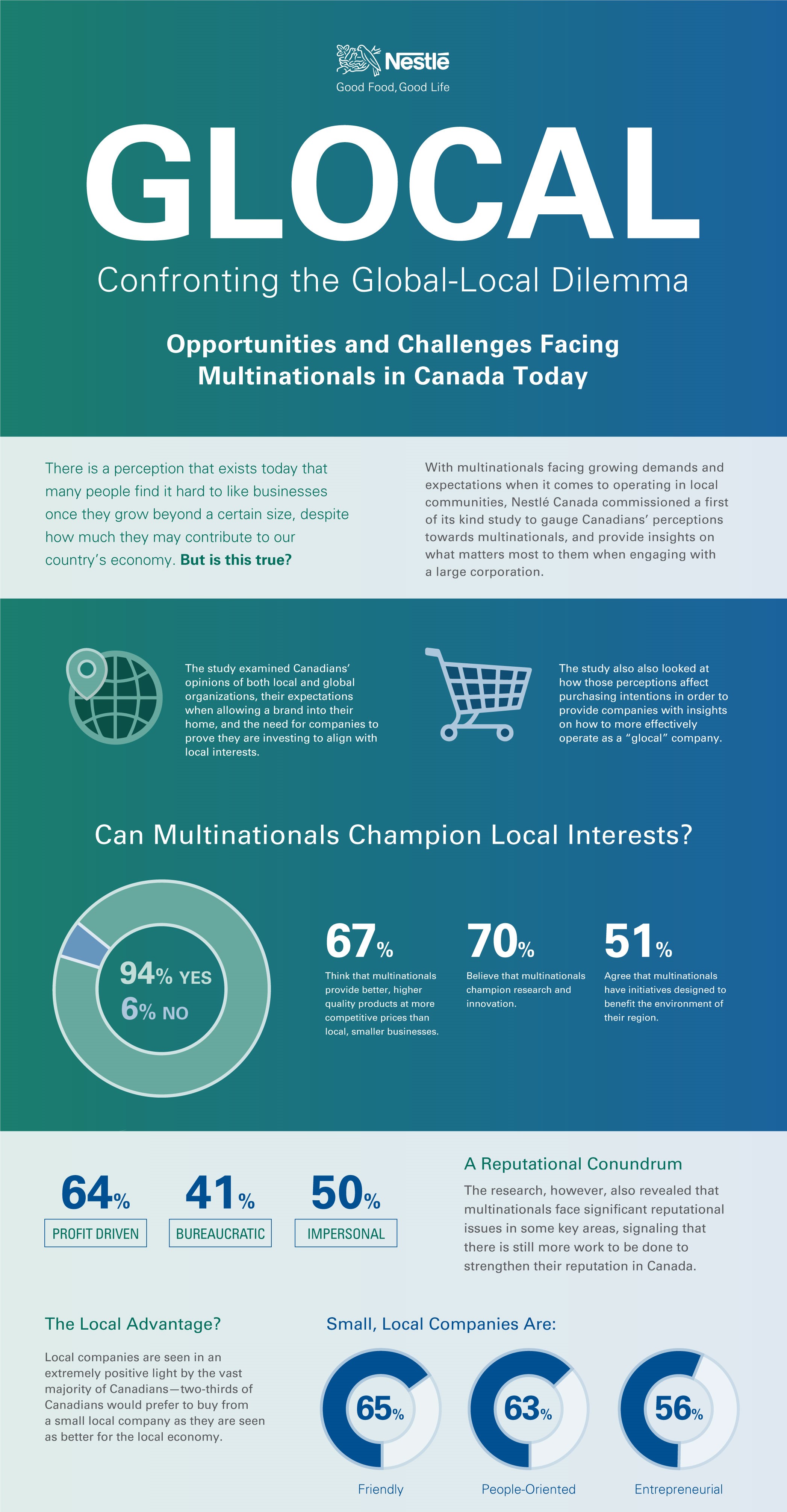 About Nestlé in Canada
Backed by more than a century of research and experience, Nestlé in Canada's vision is to be the most trusted and respected food and nutrition-n company in the country, bringing Good Food, Good Life to Canadians. Nestlé in Canada manufactures some of the world's most recognized and trusted brands, including NESQUIK, NESTLÉ GOOD START, HÄAGEN-DAZS, KIT KAT, NESCAFÉ, NESTLÉ PURE LIFE, NESTLÉ DRUMSTICK, STOUFFER'S, LEAN CUISINE and Nestlé Purina BENEFUL. Nestlé in Canada employs approximately 3,500 people in some 20 sites, sales offices and distribution centres across the country. More information and details are available at www.corporate.nestle.ca

About the Study
The Nestlé Glocal Survey was conducted by Pollara Strategic Insights via an online survey between July 26th and August 2nd, 2017, with an online sample of 1,201 adult Canadians. Data has been weighted using the latest Canadian census information to be representative in terms of age, gender and region. The margin of error for a probability sample size of 1,201 is ± 2.8%, 19 times out of 20.