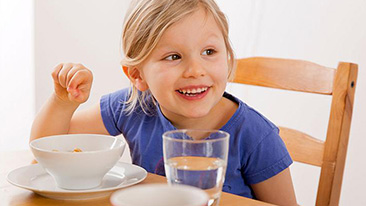 We all know that pleasurable feeling of satiety, the satisfaction you feel when you’ve eaten and feel full.

“I defy you to agitate any fellow with a full stomach,” wrote the English writer William Cobbett.

While satiety feels good, what is less clear is how much food we need to eat to reach this state, given that people still eat when they feel satisfied.

What is a ‘portion’ or a serving? It is an unspecified amount of food that someone decides you should eat. Who is this ‘someone’?

It’s you ultimately, but it’s also the restaurant owner, parent, or food manufacturer who has packaged up the food for you to buy.

An overly large portion size may tempt you to overeat, and research consistently shows that when larger quantities of food are served, people eat larger portions. This is why portion sizes matter.

The World Health Organization (WHO) estimates that over 600 million people worldwide are obese, and describes obesity as one of this century’s greatest public health challenges, given the higher risk it brings of cardiovascular disease, diabetes and stroke.

The neuroscience of ‘dietary restraint’

A new study from the Nestlé Research Center (NRC) in collaboration with the Vaudois University Hospital Centre, University of Lausanne (CHUV) in Switzerland provides further evidence that ‘dietary control’ based on motivational and attentional processes in the brain play a key role in portion size choice.

Study leader Dr Julie Hudry suggests that those who overeat or ‘emotional eaters’ (whose consumption is triggered by anxiety, sadness or loneliness) may lack such control, but that education could help these groups.

In the research, normal weight women were asked to look at photos of the same dish in varying portion sizes (from small to large) and select the ‘ideal’ size “to stop feeling hungry until an evening meal”.

Using neuroimaging, the scientists documented the greater activity that the women experienced in the “visual, salience and reward” regions of the brain when they first saw pictures of portions they subsequently judged to be ‘too big’, versus the portions that they judged to be ‘too small’ or ‘ideal’.

Dr Hudry says her team’s study is the first to provide evidence that activity in different parts of the brain, involved with attention and adaptive behavior, quickly succeeded these reward-related reactions.

Brain activity was ultimately highest in the regions involved with attention and adaptive behaviour for the portions that the women decided were ideally sized, suggesting that they exercised dietary restraint when making their choices, balancing energetic needs against the desire to control intake.

“We found two mechanisms working in parallel,” Dr Hudry says. “One involved more in counting – how much food is present, how many calories and possibly how much reward. The second is this regulatory mechanism – judging what amount is appropriate for me to feel full until the next meal.”

“What we don’t know is if this second mechanism is disrupted somehow in people who tend to overeat,” she adds. “Communication around this regulatory mechanism is something that could help people to control their hunger.”

‘Mindless eating’ and the disappearing peanuts

Research consistently shows that when larger portions of food are served, people eat more, so unconscious choices regarding portion size may be to blame.

Dr Lisa Edelson, another NRC scientist who conducts research in this area, says that some people seem to be unaware that they are serving, let alone eating, unduly large portions.

She describes one NRC study where the amount of food parents estimated that they served their children was substantially different than what scientists later saw them serve in a lab. Portioning out ‘amorphous’ foods that are hard to count or quantify, apple sauce, for instance, may be particularly difficult.

Edelson also identifies ‘mindless eating’ as another contributor to over consumption. Many of us will have experienced this. You’re watching a gripping TV show and suddenly realise that the peanuts you were enjoying have all but disappeared.

Snacks can be treats we eat for pleasure, not to fill us up, but they still contribute to our overall calorie intake. In the long-term, this can lead to weight gain.

Lisa Edelson recommends encouraging people to serve only the amount they would like to eat in one sitting onto a plate, then to put the pack away. Even the small amount of effort required to fetch more food from the kitchen can make you consider whether you actually want it, she adds.

Research indicates the difference that education can make in choosing the correct portion size. It’s why Nestlé has made a voluntary commitment to provide portion guidance on all children’s and family products by the end of 2015 to support portion decisions at the point-of-sale and moment of use.

The company is also developing new tools and new types of packaging to help educate people about what constitutes an appropriate portion size, and to help them select it.

The guide treats pizza as a ‘mixed dish’ that combines several food groups in one slice – grains in the crust, calcium-rich dairy, vegetables and protein. It advises filling half your plate with additional vegetables and fruits to eat alongside the pizza, and moderating how much of it you eat to ensure your daily sodium intake is consistent with dietary recommendations.

In Canada, Nestlé has partitioned a 45 gram box of Smarties into three parts, with 15 Smarties containing 70 calories in total in each portion. The aim is to cause a “physical disruption to your eating pattern, to make you think before you overdo it”, given evidence of confusion among some Canadian consumers over what constitutes an appropriate portion size.

Understanding why we eat

While education around portion sizes and a linked focus on packaging design is vital, cutting sugar, fat and salt levels in certain foods can make the same-sized portion more appropriate, and adopting both strategies will deliver healthier and more satisfying choices to the consumer.

Nestlé has made a series of commitments in this area on top of the work its researchers are doing to examine how smaller portion sizes can still satisfy consumers.

Ultimately, the goal is to feel well-nourished after eating just the right quantity of food, which requires education. Since William Cobbett’s contented diner is so difficult to annoy, it’s safe to ask them the following questions: “Are you comfortably full, or too full?” “If you’re too full, then why did you overeat?”

It’s only by better understanding the reasons why we eat that can we implement practical measures to reframe the portion sizes that have crept up over time, along with our waistlines.