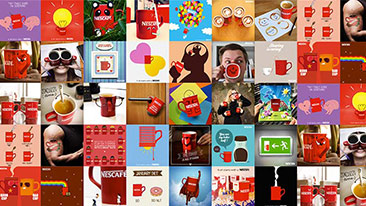 Nescafé, the world’s first instant coffee and the fifth most valuable food and drink brand, is launching a unified, global look and feel across all products in the 180 countries where the coffee is sold.

It is the first time in the brand’s 75-year history that each and every Nescafé product will share the same visual identity and use the same new slogan: “It all starts with a Nescafé”.

“Nescafé is our largest single brand, a CHF10bn brand, and one of the cornerstones of our company. It is a symbol of Nestlé all around the world,” said Patrice Bula, Nestlé’s Global Head of Marketing.

“But we live in a more globalised, social world and we realised that we needed a more unified, powerful umbrella for a brand like Nescafé - a single personality that could also be expressed differently in each country,” he explained.

The unified approach to packaging design, communication and digital strategy for Nescafé, drunk at a rate of 5,500 cups each second, will feature several key design elements developed with new, younger consumers in mind.

These include the Nescafé red accent, taken from the modernised Nescafé brand mark, the iconic red Nescafé mug and a stylised graphic device, the “hub” – an aerial view of a mug of coffee.

The way coffee is consumed is changing with coffee shop trends attracting a new, younger group of consumers. The REDvolution is Nescafé’s response to this shift in behaviour.

To reflect coffee’s status as a uniquely social product, the REDvolution also includes digital and social innovations and services, such as the first social alarm clock providing a personalised wake-up call.

Already, Nescafé, the world’s biggest selling coffee brand by a factor of five according to Euromonitor, has grown its online Facebook presence to more than 25 million fans in little over a year.

The REDvolution is just the latest stage in the brand’s continuous renewal and renovation and is being rolled out globally throughout 2014, covering over 90% of sales by the end of the year.

We live in a more globalised, social world and we realised that we needed a more unified, powerful umbrella for a brand like Nescafé - a single personality that could also be expressed differently in each country Patrice Bula, Nestlé’s Global Head of Marketing

There will also be new products and improved recipes. This month, Nescafé is launching Shakissmo in seven European markets. The chilled, milk-rich ready-to-drink coffees come in a specially designed cup that, when shaken, creates a creamy froth.

One of the brand’s biggest successes and breakthrough innovations, the introduction of Nescafé Dolce Gusto in 2006, helps consumers recreate the coffee-shop experience at home. This fastest-growing global coffee machine is now close to being a billion dollar brand in its own right, with a presence in 73 countries and sales of five million machines in 2013 alone.

Other successful coffee systems include Japan’s Barista system and Nescafé Milano Lounge machines, designed for hotels, restaurants and offices. In Thailand, Nescafé is launching a new coffee system called the Nescafé Red Cup, with a price point which represents the lowest possible cost for such a machine.

“Nescafé is a pioneering brand,” Mr Bula said. “We need to demonstrate that this brand is as relevant today as it was 75 years ago, with a portfolio that satisfies the changing world of coffee and evolving consumer tastes.”

Facts and figures on Nescafé