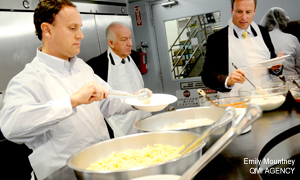 Nestlé Canada is pleased to announce that our Trenton Food Service facility has received $1.5 million in funding from the Ontario provincial government’s Rural and Economic Development Program for expansion. This marks the second major expansion in the Trenton plant which Nestlé has invested over $20 million in the past year. Nestlé also received $1.5 million from the province’s Eastern Ontario Economic Development Fund in 2010.

Funds will go towards a 30,000-square-foot expansion in the plant's west end, creating 28 new jobs. New lines will be installed in both the frozen and dehydrated food categories for distribution across North America. This will improve our competitiveness in an already tough marketplace by allowing us to bring in new products and new technologies.

Northumberland-Quinte West MPP Lou Rinaldi was on-hand for the announcement and said, “This is one of the best plants in North America and it's great to have this investment in the region.”

This marks the second major expansion at the plant within the past year. Nestlé Trenton started a multi-million dollar overhaul in 2010 designed to streamline operations and reduce environmental impact which helped create 16 new jobs.