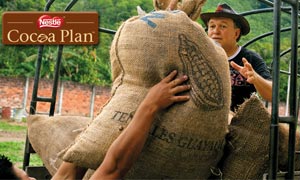 The Nestlé Cocoa Plan, which was scaled up this year to increase the sustainable supply of quality cocoa and the number of cocoa farmers and their communities who benefit from the initiative, has delivered a record amount of cocoa.

A total of 38,000 tonnes of good-quality sustainable Nestlé Cocoa Plan crop has been sourced from farmers worldwide during the harvest period from October 2011 until September 2012, over a fifth more than last year.

The plan helps farmers and their communities by providing them with long-term economic security and training.

Nestlé is working closely with those involved at every stage of its Nestlé Cocoa Plan supply chain in order to ensure a sustainable flow of quality cocoa.

By 2013 the company aims to source up to 15% of its global cocoa supply from farmers it covers.

For the first time, the company has distributed more than one million cocoa plants to farmers so far in 2012.

Globally Nestlé has trained more than 21,000 farmers this year, over a tenth more than 2011. This includes more than 9,900 farmers in Côte d’Ivoire.

By 2015 Nestlé aims to train an additional 24,000 farmers in the country, and deliver a further three million plantlets. 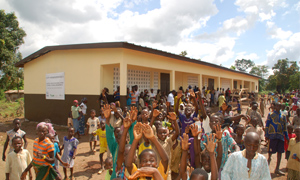 As part of the plan, the company has partnered with the World Cocoa Foundation in Côte d’Ivoire to build or refurbish 40 schools in four years. It will also focus on teacher training, adult literacy and community-based child labour awareness programmes.

For Nestlé, building a sustainable supply means supporting the communities in which it operates, and education is a vital part of this.

A new Nestlé Cocoa Plan school was opened in Kranzadougou, a Coopahk village in the Ivorian region of the Duékoué Department of Moyen-Cavally.

A further nine World Cocoa Foundation schools supported by Nestlé will open in the country in October 2012.

As well as scaling up the Nestlé Cocoa Plan, the company is working with the Fair Labor Association (FLA) to help ensure a flow of sustainable cocoa in Côte d’Ivoire.

Earlier this year, Nestlé and its partners announced that they would involve communities in the country in an effort to prevent the use of child labour in cocoa-growing areas by raising awareness and training people to identify children at risk, and to intervene where there is a problem.

Nestlé drew up an action plan following a report on the company’s cocoa supply chain in Côte d’Ivoire by the FLA this year.

The code is near completion and will be distributed to 25,000 farmers in Côte d’Ivoire.

Nestlé is continuing to work with suppliers, certification partners and other bodies to ensure those working throughout the cocoa supply chain receive better training on child labour.

Nestlé and the International Cocoa Initiative, a foundation that works with the cocoa industry, civil society and trade unions, set out a new ‘monitoring and remediation’ scheme to be piloted in 40 communities covered by two cocoa farm co-operatives in Côte d’Ivoire.

The scheme is now underway and is being extended to farmers and their communities.

The company has also organised its first training sessions on child labour for about 115 supplier staff and 75 Nestlé staff.

Nestlé is committed to transparency throughout the process and in its action plan.

Nestlé and the FLA’s first stakeholder convening is taking place in Abidjan, Côte d’Ivoire, before the end of the year. It will focus on further improvements to the action plan and community-based monitoring and remediation.

The Nestlé Cocoa Plan website, detailing the company’s work with farmers and partners, is now available in five languages.